Today was the fishing tourney in Animal Crossing: New Leaf! During the fishing tourney, you have until 6 p.m. to catch the biggest fish. I like to play toward the later part of the day, when someone else has already set the record. That way I can see what I have to beat, and normally if I beat the record, it’s close to 6 p.m. and no one else can beat ME!

As soon as I exited my house, I headed over to Chip so he could explain the rules to me.

Wow, can’t believe I’ve never done a fishing tourney in this game before! 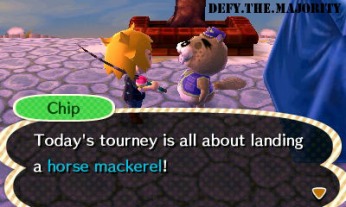 I headed down to the beach in search of horse mackerels. Lucky me, I caught one on my first try! My character looks a little stoned, so I’m surprised she caught anything at all. 😉

I caught a few more fish for good measure, then took them up to Chip for evaluation. NONE of them were big enough to take over first place! Crap! It wasn’t looking good for me.

I headed on down to the beach to fish a little more. I only had about 6 minutes left to fish, so I figured my chances weren’t very good. To my surprise, I caught an 18.50 inch horse mackerel, which I knew would take over first place!

This is a nice little spot to fish.

We may have a winner folks!

I rushed over to Chip, who confirmed that I was now in the lead. He also gave me a puffer fish tv, which I was super excited about! I’ve been wanting one of those!

Aww what a cute tv!

With only a couple minutes left of the tourney, I decided to sell off the other fish I had caught. I also took a quick trip to Main Street to visit the museum and say hello to some of my past villagers.

As I crossed the railroad tracks back into town, I was alerted that the fishing tourney was over. All right, time to see if I won!

Following Chip’s instructions, I headed into the tent for the awards ceremony. And… yay! I got first place! 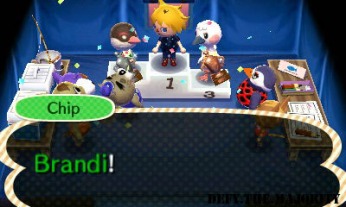 Look how cute and happy everyone is! I snagged a gold trophy for my efforts.

As I previously stated in another post, once I finish one game, I like to choose another one to play and beat. Neopets: The Darkest Faerie is a game that I have had in my PS2 library for quite some time. In fact, a quick look at my saved game data before I started anew told me that I last played 10/05/2007. Oops! I didn’t get very far in the game anyway, so I didn’t mind starting over.

Now, keep in mind that I do not know a whole lot about the Neopets universe. I know for a long time it was a very popular website and I even visited it a few times. There was a lot of stuff to do, but I couldn’t really get into it because I felt like it was a giant time suck! Some of the games were pretty fun, and there were a lot of cute characters to collect and take care of. I don’t know how active people are on the site nowadays, but if you are interested, you can visit it here.

Anyway! I picked up The Darkest Faerie because it was cheap and I thought if the Neopets website was kinda cool, this game might was worth a couple bucks. Now, 8 1/2 years later, I’m about to find it if it was money well spent! 😉

I began gameplay as Tormund (or Tor, for short). Tor is a… wolf? I wasn’t sure, so a quick reference check told me he is a Lupe. Sweet, close enough! Anyway, Tor just wants to be a knight, but at the beginning of the game, I have to do mindless shit for his family members who can’t seem to help themselves!

First, his dumb sister makes me round up some Whinnies that escaped their pen. Just look at the stank eye that little bastard is giving me!

Next, Tor’s mom wants me to fill up a bucket of water. Why? Because she’s lazy, that’s why! Anyway, once I filled the bucket up, the water pump broke. Shit. Now I have to go find Tor’s father to have him fix it.

Why don’t you do it!

It’s not your fault, Tor. Blame your father!

Dear old dad is in the barn, where he tells me that I need to go on top of the barn to retrieve his pliers. Well, why the fuck are they up there in the first place?!

Finally, Tor’s dad fixes the pump and tells me to meet him in the house because he has something important to tell me. When I get there, he says I need to deliver an important package to Meridell… and that I get to carry a sword! Finally, a weapon!! I grab the sword (ugh, it’s only a wooden sword!) and start chopping everything up!

I even tried to kill Tor’s mom, but she didn’t even flinch. Bummer.

After taking a brief detour to make some weird poses and trample through a field of crops, I head off on my merry way towards Meridell.

What the hell is even happening here?

Along the Farm Road, I ran into some asshole bandits trying to rob a poor frog-beggar-thing. I stabbed them with my sword repeatedly until they retreated. To thank me, the beggar gave me an amulet that allows me to use motes. Motes, when equipped, infuse your sword with all kinds of fun magic!

Farther along down the road, I spotted someone else that I tried to stab. Oops, it was my friend Claire. She just wants to play hide and seek!

I found her, and she gave me a dark magic mote. Yes! Dark magic is more my style!! 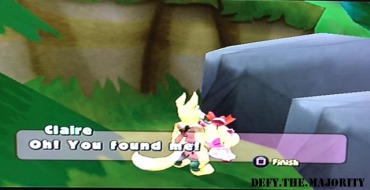 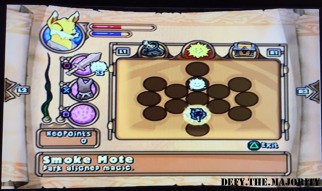 While playing hide and seek, I found this cute little PetPet. I fed it, and it followed me around for awhile. I don’t really know what it’s supposed to do yet, but it sure is cute!

I saw a few more characters on the road that probably need my help, and I want to speak to each of them before I continue to Meridell. I figure they will probably give me more motes if I complete their tasks! For the time being, though, I saved my game and called it a night.

So far so good with this game! I don’t really know what’s going on yet, but I’m enjoying myself anyway. I can’t wait to see what happens next!