Much like Groundhog Day in City Folk, Groundhog Day in Animal Crossing: New Leaf is a pretty quiet affair. As I loaded up my game, Isabelle told me it was Groundhog Day and that I should visit her at the plaza. And wouldn’t you know it, that’s exactly what I went and did! 😉 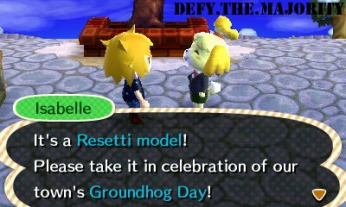 She gave me a Resetti model in honor of the “groundhog” that would predict how soon spring would come. She also seemed to agree with me about spring coming early.

I then walked over to the photo cutout that was up, and I took a picture of myself with Resetti. I made sure I looked nice and grumpy!

I decided to put my shiny new Resetti model on display in my house for awhile. One of these days I will change the furniture so it won’t be decorated for Christmas!

Also, when I started up my game, Isabelle told me I had a new neighbor. I tried to visit him, but he wasn’t up so early in the morning. I can’t say I blame him!