Fish Frenzy Mania is (another) match-3 type game created by Team Lava. In this game, you match cute little ocean/ beach themed bubbles. What’s interesting about this game is you actually have to match the bubbles several times before they “pop,” and they get bigger and bigger each time you match them. You’ll know they are about to pop when they start quivering like jello on the screen!

The levels start out pretty simple, presenting you with the task of popping the bubbles to win. As you progress, you may have to pop bubbles near sand to clear it, near statues to break them or near treasure to collect it. 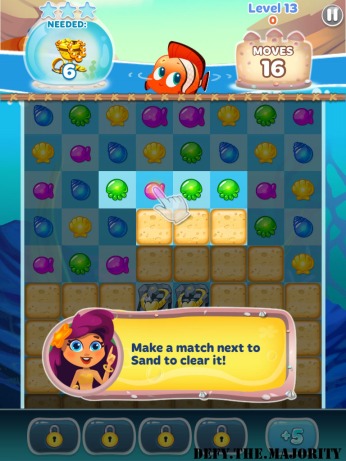 The first time I died was on Level 12. That’s when I realized that, just like most games like this, you only have a certain number of lives! In this case, that number is 5. It doesn’t really bother me, though. I’m not impatient- I’ll just go do something else while I wait for my lives to fill back up.

The ONLY thing that bugs me about this game are the “challenges.” Look at the screenshot below:

Yes, a “challenge” is nothing more than blatant advertisement to try to get you to download other games. How annoying! Luckily, this doesn’t really pop up very often. I also haven’t been bothered to connect to social media, so I’m glad about that.

All it all, Fish Frenzy Mania is a cute, fun game. I love the beachy vibe! It’s not exactly a groundbreaking game or anything, but it’s fun to play when you have a few minutes to spare. I’m on Level 22 right now, and there are currently 252 levels in the game. I’m not sure if Team Lava will add more on or not. Either way, it’s a fun game that’s worth a download if you want to pass a little time!