…you know, at least until there is another update! I’ve been a fan of the original Angry Birds game since it was first released back in 2009. At its core, it really is a great game. Sure, it can get frustrating at times, but I’ve never encountered a level so hard I want to delete the game and never play it again. My problem is this: I haven’t kept up with the game very well. As a result, there are SO MANY levels I haven’t played.

I’m sick of this being the case, so I thought now would be the perfect time to get back into the game! I fully updated it, and it seems I left off on Part 2 of the BirdDay Party, which was released for the game’s 3rd anniversary. 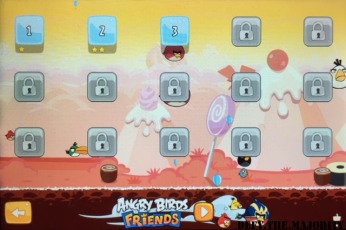 The latest update was in December 2015, when Part 6 of the BirdDay Party was released to honor the game’s 6th anniversary! I am very far behind. 😦 No matter. I’m determined to start popping those piggies again and finally catch up with the game! I also am way far behind on all the Angry Birds spinoffs as well, but I can only worry about one thing at a time here!