I know, I know. Sometimes I’m a little “late to the party” when it comes to games released for iOS/ Android. I tend to overlook games when they first come out for the App Store, because I only have so much storage on my phone! And since my iPad is older, a lot of newer games won’t work on it. Besides, I have so many games to play already. I do enjoy games on my iPad and iPhone, though, so every now and then I’ll scroll through the App Store and see what catches my eye.

One game that I’ve seen (and heard) a lot about is Crossy Road, released in late 2014 by Hipster Whale. It’s basically an endless Frogger-type game where the whole goal is to get as far as you can without dying. There are many obstacles, including cars and trains that will immediately flatten you, trees that will get in your way, and rivers to cross. The blocky, Minecraft style graphics are pretty neat as well. A few days ago, I finally decided to download it and play it!

Let me just say that this game is pretty tough and unforgiving! Pretty much any mistake you make results in instant death. You can’t even stay still for long periods of time, or a bird will swoop down and eat you! Or carry you away. Or something. 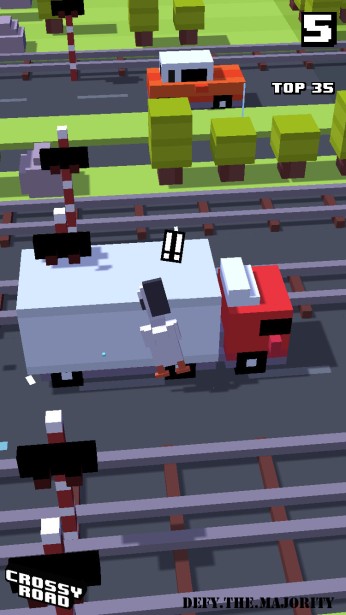 Deaths occur in this game…

lots and lots of deaths.

Despite this fact, I found myself playing it over and over, just trying to get a little further each time. The board constantly changes, so you are never going through the same motions twice. The board also changes depending on what character you are using, which I think is pretty neat!

Board for the Emo Goose.

Board for the Penguin. 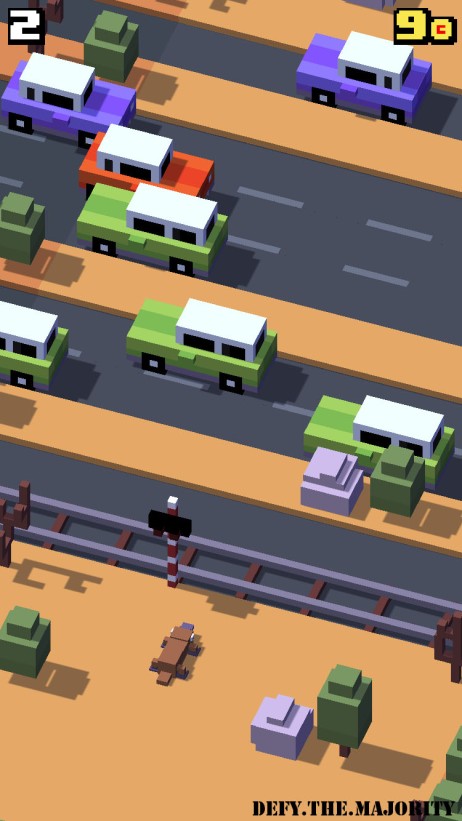 Board for the Platypus.

I am especially in love with the Pac-Mac Board!

Speaking of characters, there are TONS of unlockable characters in this game! Right now I have 7/159 characters, so I have a long way to go. Check out some of the ones I have unlocked so far: 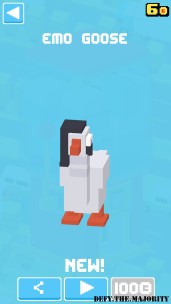 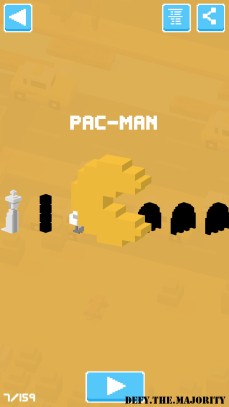 I REALLY want to unlock Floppy Fish, because it looks funny! I also really want to unlock The Dark Lord, because… well, if you know me, you wouldn’t be surprised. 😉 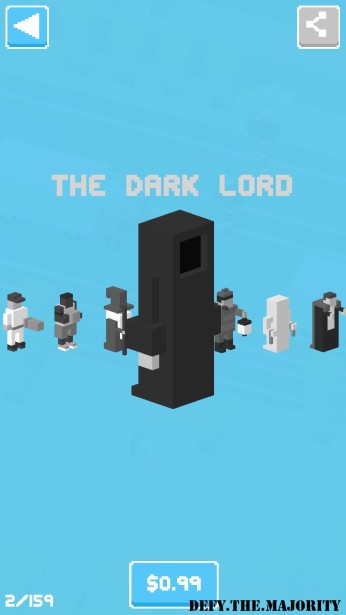 By the way, the default character is the chicken.

Of course, there are a few characters available only by purchasing them with real money, but I doubt I’ll be doing that!

You unlock characters through a little coin machine type thing, which you can play when you get 100 coins. According to Wikipedia, “Coins can be obtained in-game via landing on them during gameplay, watching advertisement videos, completing tasks, collecting a free gift given every few real-time hours, and using real money to buy them in various amounts.” You can also pay 99 cents for a specific character right away if you’re impatient- nope, I won’t be doing that either!

Overall, this is a REALLY fun game, and I would recommend it to anyone that’s got a couple minutes to spare. You don’t have to devote that much time to it, there are tons of wacky characters to collect, and the game board is always changing. It’s a shame I didn’t download this sooner!

I also want to mention that there is a sequel of sorts to this game called Disney Crossy Road. It’s very similar to Crossy Road, except with Disney characters and themed boards with certain objectives to complete. Despite the fact that I’m not a huge Disney fan, this game still looks like fun. I may still download it at some point! 🙂