Some of my remaining Christmas money was burning a hole in my wallet, just begging to be spent, so Michael and I recently went on a little gaming shopping spree!

First, we went to a GameStop to look around. I think I’ve mentioned it before, but I don’t really like GameStop all that much, and I don’t shop there very often. I really only like to look through their games that are dirt cheap. Anyway, this particular GameStop really pissed me off!

First of all, I was going to buy a Boo amiibo, and the box was all banged up and there was a sticker slapped on it haphazardly. I don’t care about keeping my amiibos in boxes, but I know a lot of people do, and the carelessness of it just annoyed me. Second of all, the guy who worked there was really rude. Normally I don’t let things like that bother me, but I had a headache and wasn’t in the mood for bullshit. So we left!

The second GameStop we went to was much better. I did end up buying a Boo amiibo there, and I’m glad I did. He is too cool! I love the fact the he glows in the dark.

I also picked up Cooking Mama: World Kitchen for the Wii. I recently realized that I am missing like 3 Cooking Mama games, and I really enjoy that series! So I was able to cross this one off my list. 🙂

They also had Theatrhythm Final Fantasy: Curtain Call for the 3DS for a really cheap price! This game has interested me for quite some time, so I can’t wait to play it! 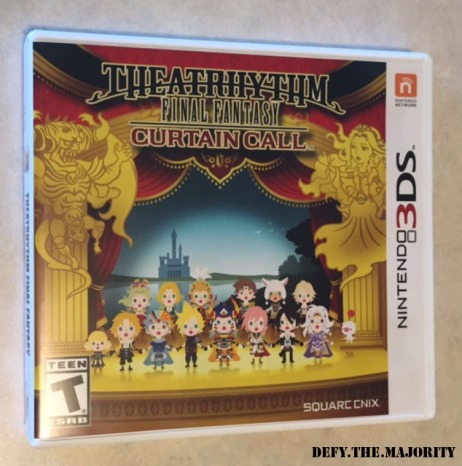 We then decided to hit up a little store called Cybertron, which we had never been to before. Since we just moved to this city a few months ago, we are still learning the area. My husband saw it online and it’s only about 15 minutes from our house, so we decided to check it out!

And man, am I glad we did! What a cool store! There are SO MANY games from SO MANY different systems, it was hard to decide where to look first! They had a decent selection of imported games too, which was super cool. They happened to have a promotion where it was buy one, get one 50% off so I ended up buying several games!

First of all, I picked up Jeopardy! 25th Anniversary Edition and Wheel Of Fortune for the NES. I know, there are many updated versions of these games, but they were only $2! 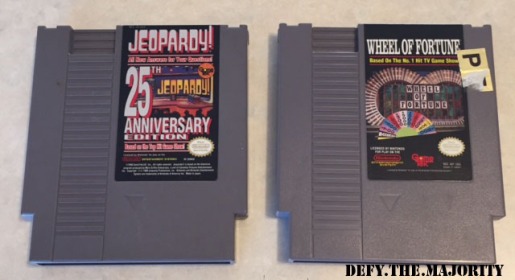 I also picked up Mario’s Time Machine for the SNES. Yes, I realize to many people, this game sucks, but oh well. It was cheap, and I’ve never seen it in person before, so I wanted it!

I got 2 Super Famicom games… one is called ライトファンタジー, or Light Fantasy- this is an RPG never released anywhere outside of Japan. 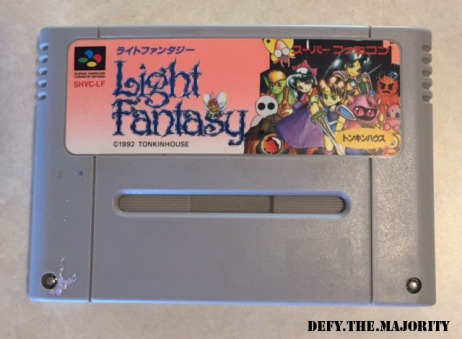 And one is called バンプレスト / コンパイル, or Super Nazo Puyo- Lulu no Luu- this is a puzzle game from what I understand!

I was really excited to get this games until I got home and realized I was a TOTAL IDIOT. Somehow I managed to forget all about the fact that the SNES is region-locked and will not play imported Super Famicom games. WOW. How did I forget that?! I know I can break the tabs inside the SNES so the cartridge will fit, but I’m not really that talented and will probably break the whole thing. Ugh! I’ve been looking around for a converter like the one I have for my N64, but they seem kind of expensive. Oh well, I’ll figure something out. At least these games only cost me like $5 each!

Moving on from my idiocy, I nabbed a game called Bio Freaks for the N64. I don’t know much about this game at all (in fact I’ve never even heard of it) but I looked it up. It’s a fighting game made by Midway. So maybe it will be similar to Mortal Kombat? 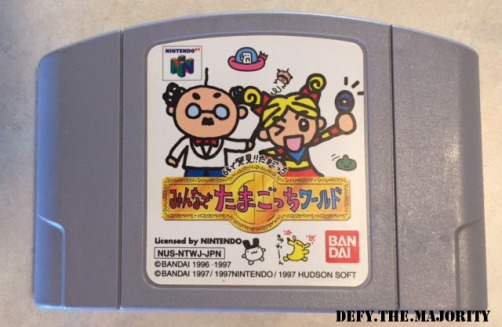 I was SO EXCITED to see this game! I’ve wanted this game for years. It’s kind of like Mario Party, but you have to raise your Tamagotchi and take care of it as you go around a game board. And yes, since I have a converter for my N64, I can play this game! I did test this game out when I got home since it sounded like the cartridge was rattling a little bit, but everything works great! It seems like an adorable game. At $13, this was the 2nd most expensive game I purchased that day, so not too shabby!

So what was the most expensive purchase that day? My shiny (used) PlayStation Vita! 🙂

I have been wanting a Vita for awhile, but for some reason I kept putting off getting one. My husband has one, but I wanted my own because I wanted to link it to my own PlayStation account and use my own memory cards for games instead of using his up! Plus, I’ve read about so many great games for the Vita that I want! Anyway, it was sitting there at the store for $130 bucks in almost brand new condition (there is one small scratch on the screen that you can’t even really see), came with a 4GB memory card and a free charger, and I had my Christmas money… so I bought it! 🙂

And just so I had a game to start out with, I bought Persona 4: Dancing All Night. I also have Super Monkey Ball: Banana Splitz that I bought awhile back, plus all of my husband’s games, so I have enough to keep me busy for awhile!

A few days after that, we went shopping at Target. I was surprised to see Paper Mario: Color Splash for the Wii U for $20 off, so I went ahead and nabbed it!

I also picked up this adorable Pokémon handbook.

And even though this isn’t exactly video game related…

I do enjoy board games and puzzle games, so I thought Cat Stax looked like fun! There are 48 different puzzles on cards to solve, and your goal is to fit the little cats perfectly in the grid for each puzzle. Seems like it will be challenging and fun!

So there are all the goodies I got with my Christmas money! 🙂 I told myself I wasn’t going to add to my backlog anymore, but fuck it, there is no way I can stick to that! 😉