As you know, a few weeks ago I picked up a PlayStation Vita along with Persona 4: Dancing All Night. This game is a sequel to Persona 4: Golden, which I have not played yet.  Here are my first impressions of the game!

When I first started playing, I was greeted with a cheerful title screen. That disco ball has a cute face on it!

There are several different game options, but I chose Story Mode, because I have no idea what I’m doing.

Since this game is part visual novel, part rhythm game, there is quite a lot of reading. The game starts out with some girls talking about a freaky website.

Apparently you see some dead chick, pass out, and wake up in “The Velvet Room.” 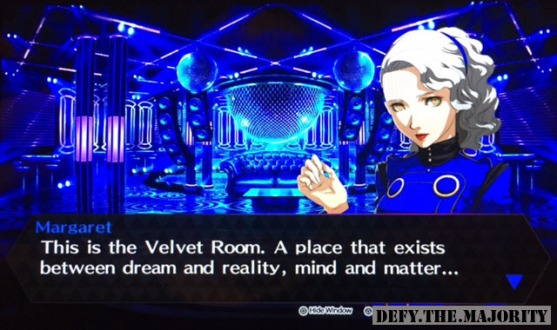 Here you will learn about Rise and the rest of the Persona 4 crew as they practice for an upcoming dance festival. So far,the story is told through Yu’s eyes, but I don’t know if that changes as you progress through the story. Even though I wasn’t familiar with the characters, it’s easy to get to know them.

One thing that makes me laugh about this game is how character’s are first described before you figure out their names. Some of them are nice…

While others seem just rude! 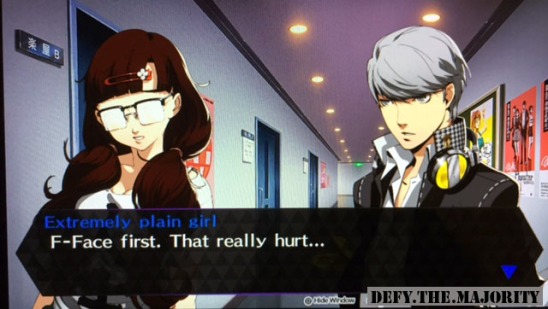 Anyway, I got up to the point where you meet the Kanamin Girls and they give an interview. They describe themselves very… strangely… 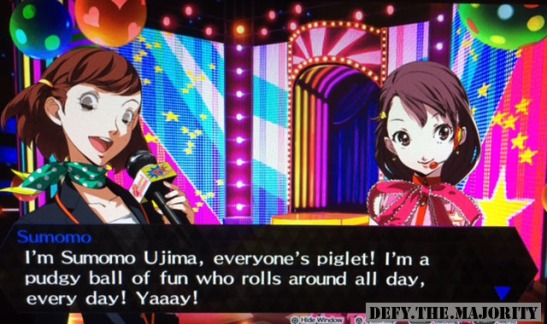 I really like this game so far! Even though this game is actually a sequel, I don’t feel lost playing it. The game does a good job of explaining who everyone is. So far a lot of it is reading and making the occasional decision, but I know the rhythm part will kick in soon. I wanted to play through Story Mode first, then work on Free Dance mode (where all the songs are available).