For this month’s Why I Love… post, I thought I’d give a nod to one of my favorite video game series of all time… Donkey Kong Country! This series has captivated me ever since I began playing it in 1994! And yes, the first game in the series is actually just called Donkey Kong Country, but this post is about the series as a whole. 😉

I first played the original Donkey Kong Country over at my friend Jason’s house. (Hey, I mentioned him in my SNES post too! 😉 ) Jason lived in my neighborhood and had a whole room of his house dedicated to gaming! I only had a Game Boy back then, but Jason had home consoles to play, so we often went to his house to play games! One day he showed me a new game he was playing: Donkey Kong Country. He was trying to get past a level called Orang-utan Gang. The moment I saw him playing it, I was hooked!

The world within this game just seemed so vibrant and alive! I was a kid, so I didn’t understand what it meant to produce those fancy graphics, but I knew it was something special.

As you know from my previous Why I Love… post dedicated to the SNES, I soon got my own copy of Donkey Kong Country and played it SO MUCH. I memorized the levels, where the enemies were, etc. I probably played through that game more times than any other game. I do recall getting extremely pissed off at one level: Elevator Antics. It was pretty difficult to time the jumps, and that’s probably the first time I ever threw my controller because of a game. (Bad idea, by the way. Don’t do that!)

The next game in the series, Donkey Kong Country 2: Diddy’s Kong Quest, captivated me just as much, if not more, than the original. I fell in love with the gloomy atmosphere right away! This game seemed considerably more difficult than its predecessor and had many more secrets to uncover, too! It took me quite a while to complete this game, and to this day I don’t think I’ve gotten all the DKC coins!

I also loved the next game, Donkey Kong Country 3: Dixie Kong’s Double Trouble. For me, this is probably my least favorite game in the series, but don’t take that as meaning that I dislike the game. I absolutely love this game, but the atmosphere and levels just didn’t quite grab me as much as the first two. I do remember the level Ripsaw Rage really making me nervous, because you are being chased up a tree by a giant saw the entire time!

Four years later, Donkey Kong Country: Tropical Freeze was released for the Wii U, and that is another fantastic entry to the series. This is the game I’ve played the least out of all the DKC games, and I’m not really sure why! I guess it’s just a matter of circumstance.

Besides the gameplay itself being amazing, I also really love the characters in the Donkey Kong Country series! My favorite Kong is probably Dixie. I love using her ponytail to fly across gaps and kill Kremlings! 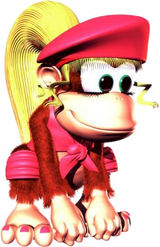 Speaking of Kremlings, I was obsessed with K. Rool when I was a kid. Do not ask me why! I think I just thought he was a hilarious villain. I also appreciated the fact that he was something different in every game: a king in the first game, a pirate in the second game, and a mad scientist in the third game! K. Rool and his Kremlings are sorely missed by me in the newer DKC games…

My expression of love for Donkey Kong Country wouldn’t be complete without mentioning the AMAZING music! The music just sets the tone for every level perfectly. I’ve always loved the music that plays during the roller coaster levels in DKC2 the most, but there are honestly so many great tunes in all these games, so it’s hard to pick a favorite!

The Donkey Kong Country series is, for me, the series that I obsessed about most during my childhood. As I’ve typed this post, I realize I have barely even scratched the surface of memories I have when it comes to Donkey Kong Country. I don’t think any other series has quite grabbed me like this one has, and I still love re-visiting the games to this day!

13 thoughts on “Why I Love… Donkey Kong Country!”