Despite the fact that my last Celebrating Kirby post was two months ago (god, I slack on EVERYTHING) I am still trying to continue toward my goal of playing every Kirby game I own to celebrate his 25th anniversary! Oh well, any progress is STILL progress, right?

After playing Hoshi no Kirby, the next game on the list is Kirby’s Dream Land!

Kirby’s Dream Land was released for the Nintendo Game Boy in 1992, not long after Hoshi no Kirby was released in Japan. As I’ve mentioned before, they are the exact same game… but it’s still fun to have both in my collection anyway!

Since I already did a more thorough write up of my Hoshi no Kirby gameplay, I won’t go level by level with Kirby’s Dream Land. Nevertheless, here are a few screenshots from my gameplay! 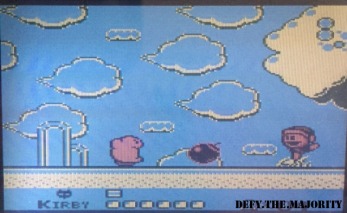 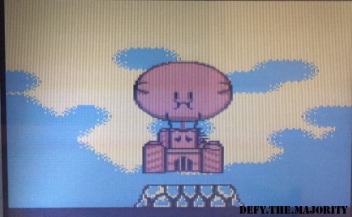 Kirby’s Dream Land is a very short game, but I really loved playing it when I was a kid. I also studied the manual extensively when I was a kid, looking for hidden secrets within the text. I, um, ate a lot of Butterfinger candy when I was younger:

HAHA! So gross! I’ve pretty much given up the habit of eating messy things and reading, thank goodness. Anyway, this is a game that will always hold a very special place in my heart, and I still love to revisit it from time to time!

Next up to celebrate my favorite pink puffball is Kirby’s Adventure! Hopefully I’ll write about it soon instead of waiting another two months! 😉