After a bit of a hiatus, I’ve decided to bring back a type of post that I’ve always enjoyed doing, but that ended up taking too much time for me to write: My Gaming Month in Review! This time around, though, I’m going to be working on this post throughout the month, so I won’t have a shit-ton of stuff to come up with when the month is over! Plus, I’m also trying to work on only one or two games at a time, so I’m more focused on beating a game before moving on, versus just jumping around from game to game. This is me we’re talking about though, so by the time next month rolls around, it could all be different. Anyway, here’s what I was up to this month!

I’ve been playing this game for a couple years on and off now, and I still suck at Japanese. One day I’ll actually start those lessons… anyway! My little village of Weezey is doing quite well, and I’m working on my second house expansion. I currently owe 163,000 Bells, so I have a little while to go!

Oh, and I also found a totally creepy policeman/ crossing guard figurine up for sale at Nook’s. Its arm moves back and forth and I don’t know… it just weirded me out for some reason. Not something I want in my house!

I am STILL playing Harvest Moon: Animal Parade. I’m determined to ring that final damn bell so I can consider the game beaten! It’s still so slow going, because every in game day takes about 20 minutes or so, and lately I haven’t had much extra time to play. I have told 9 out of 10 people’s wishes to the shrine, so I’m getting really close! Becoming friends with people so you can get their wish is a total pain in the ass though. I’m tired of giving them gifts!

I did participate in the Animal Festival, which occurs on the last day of Spring. I competed in all of the contests, and surprised myself by doing pretty well. My duck, Quackers, got 1st place in the livestock contest, while my snake, Slither, got 1st place in the pet contest! I also did a race with my cow, Ember, but the controls confused me and pissed me off, so I think I ended up in 4th or 5th place.

One extremely adorable perk to getting 1st place is your animals wear a teeny tiny crown on their head! Aww! Here’s Quackers and Slither with their crowns on (though Slither’s is pretty hard to see). 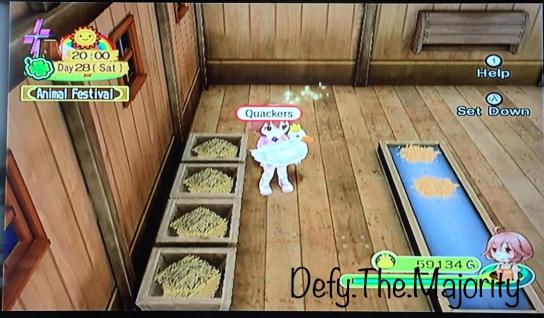 I’m still playing Animal Crossing: Pocket Camp every morning before work (and on the weekends while I’m sitting there drinking my coffee 😉 ) and I’m still very much enjoying it! Right now I’m focusing on getting all the villagers invited to my camp, which is easier said than done considering new ones keep getting added to the game! It took me awhile of sending Gulliver away with shitty items so I could get the three traveling villagers, but I finally got them all! Currently, I have 92/ 94 villagers invited to my camp.

There were a couple events I participated in this month. The first one was Katie’s Fruit Party, which was a gardening event. I’m not too fond of these events, because I don’t like how low the capture rate is. I feel like if you plant flowers and a creature appears on top of them, you should automatically catch them. I don’t like feeling like I have to play multiple times throughout the day, and I’ll be damned if I spend Leaf Tickets to complete an event. So, I just played casually and won whatever I could win, and I don’t really care that I missed out on some of the prizes.

The second event was much more fun- Chip’s Fishing Tourney #2! I don’t mind playing a couple times a day to see what fish I catch, and I don’t feel like I “have” to play. I loved catching the puffer fish! 😉

I ended up with a silver trophy, which isn’t too bad. I wish the event would’ve lasted a couple days longer, but oh well. 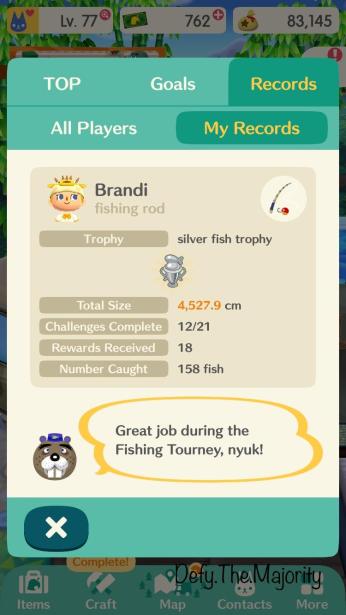 Anywho, here’s a couple different pictures of my campsite and my camper. I change everything around quite often, so you never know what to expect when you visit my campsite! 😉 I have also reached Level 79!

Well, that’s it for my gaming in May. I got some things accomplished, but hopefully by next month I’ll have some games that I can take off of my backlog! 🙂