Sorry in advance to those of you who don’t care for book reviews, since I’m doing two of them back to back! A few months ago I started receiving ARC copies from another talented writer named Ashley McLeo, who is currently writing the awesome Starseed Trilogy! So far, I’ve read two of the books and one novella, and they have all been amazing! All my reviews are posted to Goodreads, but I’ll post them again here as a courtesy just in case anyone is interested! Again, I’m not trying to go into a deep analysis here… I just want to give a brief overview of the book and what I thought of it! 🙂

The blurb from Prophecy of Three is as follows:

It begins with a burning library, a frantic witch, and an enchanted prophecy. It ends with the birth of the three.
***
Lily Whiplark returned home from college expecting nothing more than an epic summer solstice party followed by months of blissful relaxation after her devastating breakup with her boyfriend Liam. Instead, she’s handed a ticket to Ireland to meet her birth family. In the rolling hills of Ireland, Lily’s life takes a thrilling turn when she discovers she’s one of three women fated to save humanity from an alien invasion. What’s more, the events of her birth are connected to the burning of the Great Library of Alexandria, historical witch hunts in Europe, and even the legendary rift between Adam and Eve. Despite the promise of danger, Lily agrees to train in the magical arts. But will it be enough? Will she be brave enough to learn all that is required to rectify Eve’s betrayal and save humanity from magical otherworldly forces intent on chaos?

The cover of the book (which is so beautiful!): 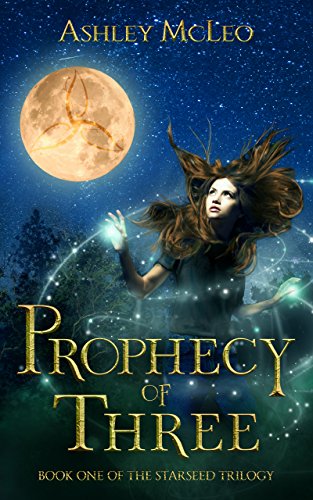 Prophecy of Three, the first book in The Starseed Trilogy, was quite entertaining! After a brief prologue, we are introduced to Lily, the main character. She has just returned home from college, and she is happy to see her unconventional family once again. (Lily was adopted and lives in a commune consisting mostly of women!) Shortly after arriving home, Lily is given the opportunity to travel to Ireland to meet her birth family. Despite her reservations, she ends up making the trip!

There were so many things I loved about this book! The characters are entertaining and engaging. I rolled my eyes at Evelyn for a little while, but she does have some redeeming qualities. Lily’s birth mother as well as her aunts are so interesting and seem like they would be some awesome ladies to have in your family! 🙂

One aspect I really enjoyed with this book is the fact that the story provides a different take on witches. Without going into too much detail, witches are apparently descendants of a race of beings called fata from the planet Hecate. I can’t wait to see how this knowledge plays out in later books!

Overall, I thought this was a fun, entertaining read, and I rate Prophecy of Three 5/5 stars!

5 thoughts on “Book Review: Prophecy of Three by Ashley McLeo!”