Evelyn Locksley, water witch, siren, and heiress is back home in New York City. She’s having a blast, running the boardroom like a boss and frequenting hot clubs for some scandalous siren practice.

That is until Evelyn is taken hostage by fata cronies, the Acolytes of Hecate. Locked in a magically warded basement Evelyn witnesses the Acolyte’s strength and begins to doubt that anyone on Earth stands a chance against the fata.

Lily Whiplark is still reeling over the loss of her beloved family member, at the hands of the Acolytes. After hearing of Evelyn’s flamboyant and selfish behavior in New York when she’s supposed to be in Ireland training for a supernatural war, Lily’s grief morphs into fury that not even triplet peacekeeper, Sara, can quell.

When Lily learns of Evelyn’s abduction will she be able to put their vast differences aside to save her sister?

Will the sisters be able to overcome their rocky past to band together against the fata and Acolytes of Hecate? 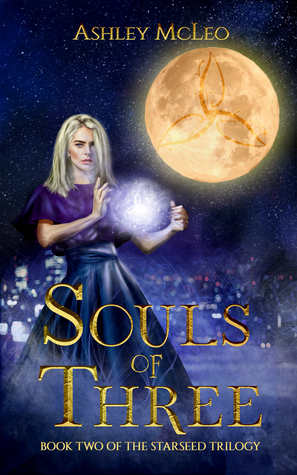 Here’s what I wrote for my review on Goodreads:

I received a copy of this book in exchange for a review! 🙂

I couldn’t wait to read Souls of Three, the second novel in The Starseed Trilogy! The characters are so well crafted and fun. This book continues shortly after the point where Prophecy of Three ended. The triplets (Lily, Evelyn, and Sara) are somewhat split up since both Lily and Evelyn wanted to go back to their respective families before continuing their magical training with their birth family.

In the beginning of this book, Evelyn really annoyed me. She seemed as self- centered as ever, though I was surprised to see how much she actually cared about her family’s business. Without giving away any spoilers, A LOT happens to her in this book, and I was pretty sympathetic toward her character in the end.

Lily also has her own problems she is working through in this book, and I felt like she was a bit bratty and self- centered as well at times. The neat thing about Lily is that she realizes she is acting this way, and grows as a person throughout the book. It’s great to see a character who is actively working on making herself a better person.

In this book, we learn that the universe is perhaps in greater danger than everyone first thought because of the fata. The triplets quickly become more comfortable with their powers- though I feel for them, because the weight of the world seems to rest squarely on their shoulders.

Anyway, this book was so entertaining, and I cannot wait to see what happens in the next one! 🙂

I gave Souls of Three a rating of 5/5 stars. Soon, I’ll post a review of the final book in the series, as well as a novella. Thanks for reading!