Rising of Three is the final book in The Starseed Trilogy by Ashley McCleo. I posted my review of it on Goodreads back in September, but I’m re-posting it on my blog so I can give the series some extra exposure!

Here’s the blurb from Rising of Three:

Mysterious claimings, kidnappings, and disasters are occurring the world over. Sara McKay knows that can only mean one thing–the fata, magical beings from the planet Hecate intent on ruling Earth, are growing stronger.

With the help of their pneumas, benevolent fata souls residing inside Sara and her sisters Lily and Evelyn, the McKay witches of Ireland prepare for war.

However, with Sara no longer playing peacekeeper between Lily and Evelyn, strong insecurities stemming from Sara’s past make a reappearance in her life. Once the most powerful triplet, she struggles to master the lifesaving skills the pneumas introduce and fully integrate with the supernatural soldiers flocking to Fern Cottage.

Will Sara’s instability help Noro and King Dimia drive a wedge between the triplets the fata forces can exploit? Or will Sara’s issues be just the thing the Triplet Army needs to win an otherworldly war?

And the beautiful cover: 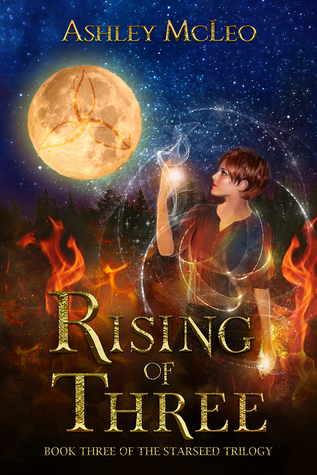 Here’s what I said in my review on Goodreads:

I received a free copy of this book in exchange for an honest review. 🙂

The final book in the Starseed Trilogy did not disappoint! In Rising of Three, Lily, Evelyn, Sara and the rest of their family and friends embarked on the final leg of their journey to defeat Noro and save the Earth from the fata. The sisters have come into their own as far as magic is concerned, and they train hard to be ready for the battle. Because they are starseeds (that is, they have a pneuma living inside them from another time and planet), the fate of the world rests on their shoulders. I don’t want to spoil too much, so I won’t say much more about the pneumas. They are very… weird but interesting!

Rising of Three is told from multiple viewpoints, though we get an extra look inside Sara’s mind this time around. I have to say, I actually did not enjoy her segments very much. She was, for the most part, a complete downer and also a martyr. More than once she either put herself in danger or did things at questionable times because she felt like she needed to. I felt more annoyed by her than anything.

Regardless, I love the way the triplets band together and always have each others’ back, especially considering they did not grow up together. This made me happy because they are three completely different people, but they stick together because they are family.

The final battle was pretty long and intense, and there were a couple deaths that really bothered me. The aftermath of the battle is pretty unique, but again, I don’t want to spoil anything. Let’s just say that the way traitors are dealt with is extremely satisfying!

I’m sad that this book marks the end of the Starseed Trilogy. I really enjoyed this series and can’t wait to see what Ashley McLeo comes up with next!

I gave Rising of Three 5/5 stars on Goodreads!