The Bluebeard Curse is the second book in the Cursed Fairy Tale Series by Margo Ryerkerk. Here’s the blurb for it:

After finding his sister crouched over their dead parents’ bodies, Nolan turns her in. To cope with his crippling loss, he seeks to forget his sorrows in revelries. But trying to escape his life only creates more problems when two girls, last seen with him, drown.

Unable to bear the town’s accusations, Nolan flees his home.

Five years later, he’s forced to return to the city that calls him Bluebeard and accept his count title. His welcome is anything but warm, friends treat him with suspicion, and the worst is yet to come…

Jolie knows servants shouldn’t interact with nobility, but there’s something about Nolan Bluebeard that makes it impossible to stay away even if being close to him jeopardizes everything she has worked so hard for.

While Nolan desperately tries to rebuild his reputation with Jolie’s help, a devastating curse has women around him falling dead one by one.

Will Nolan and Jolie break the curse, or will they die trying?

The Bluebeard Curse is the second book in the Cursed Fairy Tales series. Each book can be read as a standalone. However, for greatest enjoyment, the novels should be read in order.

Filled with adventure, love, magic, and a strong heroine, this clean YA Fairy Tale is a must-read!If you liked The Siren and The Selection by Kiera Cass, K.M Shea and Melanie Cellier’s work, you’ll love this!

Buy it now and join Jolie and Nolan on their journey to break the Bluebeard curse! 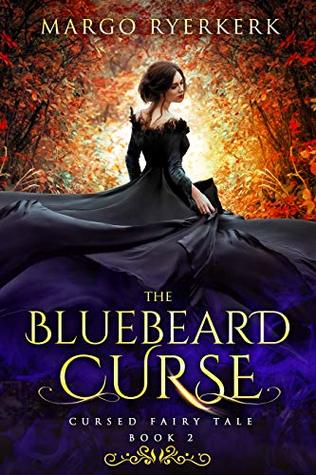 This is my review, which I published on Goodreads back in December.

First of all, I want to say that I am not at all familiar with the fairy tale this book is based off of! I’ve never even heard of it before, so I basically had nothing to compare it to.

Anyway, this book starts off with us meeting Jolie, a young woman who is a maid for a wealthy count. She likes working for him, but she is nervous when she finds out that his nephew, Nolan, is coming back from a 5 year absence to take back over his estate.

Nolan, unsurprisingly, has a bit of a shady past. His parents were killed and his sister was responsible for their deaths. Then two girls die after a night hanging out with him… so he decides to split for awhile. Oh, and he was nicknamed “Bluebeard” because he used to have a thick, black beard that had a blueish tint in certain lights.

Nolan’s sister, Delilah, was briefly featured in the Nutcracker Curse. Let me just say it right out- she is an awful character! There is not one tiny redeemable quality about her AT. ALL. She is self- absorbed and so full of hatred it’s almost unreal. Normally I can find a way to sympathize with most characters, but not her. She literally is willing to give up 15 years of her life to curse her brother because apparently he is the cause of her “suffering,” when SHE was the one who killed their parents.

Speaking of the curse, this is where the name “The Bluebeard Curse” comes in. It looks like any woman getting close to Nolan a.k.a. Bluebeard better watch themselves, because ladies have a habit of dropping dead around him.

Naturally, Nolan is attracted to Jolie even though she’s of a lower social status. Which… uggh. I find that intolerable. Even though this story was set centuries ago, it still makes me roll my eyes to know that some people care so much about that. Anyway. Jolie becomes a target because she falls in love with Nolan, and she decides that she needs to be the one to break the curse. No one likes to mind their own business I guess! I won’t spoil how the story ends, but ya know… they all live happily ever after and all that jazz.

Now, don’t get me wrong, I enjoy Margo Ryerkerk’s books very much. I liked this book, but I didn’t love it. Her writing is excellent, but the story of The Bluebeard Curse is not one of my favorites. I did become a little more invested in the characters (except Delilah) by the end of the book, but I didn’t really connect with any of them like I usually do. Nevertheless, I cannot wait for the 3rd book in the series!!

I gave The Bluebeard Curse 3 out of 5 stars on Goodreads!

4 thoughts on “Book Review: The Bluebeard Curse by Margo Ryerkerk!”