Back in March, I reviewed the final book in The Ardere Series by Margo Ryerkerk- Phoenix Unleashed! Since then, this series has been renamed as the Dark Legacy Series, so that might confuse a few people looking for previous books in the series! Anyways, since this was the 5th and final book in the series, I was really looking forward to seeing how everything ended! Here’s the blurb:

Bahadur has awoken.
His touch will enslave everyone.
Only Sierra can stop him.
Bahadur’s ascension shakes the world. Able to kill with one touch, steal supernatural auras, and turn humans into bloodthirsty henchmen, he’s invincible.

The only person who stands a chance to stop his tyranny is Sierra. Prepared to do whatever it takes to defeat him, she throws herself into danger. Unfortunately, her impulsiveness backfires and puts her in a worse position.

Desperate to undo her mistake, Sierra travels across the world to find the one magical object that might give her a fighting chance against Bahadur.

However, Bahadur is two steps ahead of her and makes a move no one expected.

Will Sierra find a way to triumph over him or will Bahadur succeed and drag the whole world into darkness?

Read it now to unlock the conclusion to the Dark Legacy series! 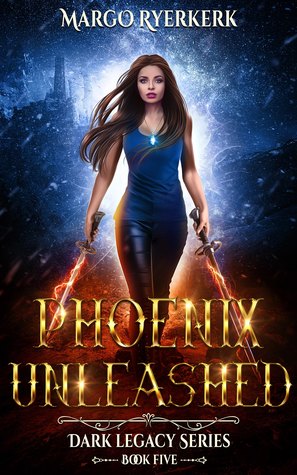 The final book in the Ardere (oops, I mean the Dark Legacy) series is Phoenix Unleashed. Everything Sierra, Gavin and the others have been working to accomplish over the past few months has been compromised with the rise of Bahadur. Now, the focus is on training each of the Ardere factions to fight against him effectively.

At first, Sierra’s attitude really sucks. She seems high and mighty and acts like she is some brilliant war strategist who knows everything. Her haste almost gets people killed, so she kind of has to reel in her attitude a little bit. Even Gavin notices the change in Sierra, and he tells her at one point that her “sense of duty extends to everything but our relationship.”

While Sierra continues to tap into her Fluidus powers and gains power, she is taken captive by Bahadur. Again, she thinks she is more brilliant than him, and is constantly attempting to outsmart him. Bahadur said something I was thinking the entire time: “You think that after 18 years of being on this planet you can stop a plan that had been in the making for over 300 years?”

Without spoiling anything, the ending is pretty much what you would expect. Everything wraps up really neat and tidy. I’m glad the series ended on a good note, because I really enjoyed it as a whole. At the beginning of this book, I felt almost as though some of the characters lost a bit of dimension, but everyone kind of got their spark back by the middle of the book. Sierra’s know-it-all attitude annoyed me for most of the book, because I felt like it was such a sharp departure from how she is portrayed in the rest of the series. I don’t see her as much of a leader, though everyone around her seems to think she is.

Anyway, despite my minor gripes, this was a really good series that I enjoyed very much. I’m sad it’s over and I can’t wait to see what Margo Ryerkerk writes next! 🙂