As many of you know, a little while back I bought the last two Animal Crossing games I needed for my collection: どうぶつの森+ (Doubutsu no Mori+) and どうぶつの森 e+ (Doubutsu no Mori e+). Okay, it was like 2 1/2 years ago… read the blog post where I talk about getting them here! Anyway, I had big plans to either mod my GameCube or buy a Japanese GameCube, but I did neither of those things. My husband and I received a GameCube from his mom’s collection after she passed away, and I figured I would mod that one. Nope. Turns out that’s way more of a pain in the ass then I thought it would be due to the fact that Nintendo uses some weird ass screws to hold everything together. So one day while browsing online, I found: 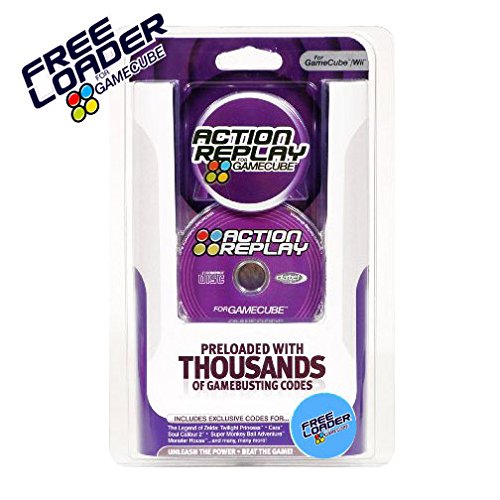 The Freeloader/Action replay combo! These suckers are really hard to come by, at least in my experience. Every single time I looked up the Freeloader (which tricks your GameCube and allows you to play games from other regions) it was expensive and not worth getting. For whatever reason, I found this Freeloader/Action Replay combo for like $29, and I jumped on the chance to get it! (For the record, I have no interest in using Action Replay)

When it came in, I was SO EXCITED! At first, I couldn’t get it to work. It wouldn’t let me click on anything! After turning my system on and off a few times, though, I was able to get it working. I popped in どうぶつの森+ (Doubutsu no Mori+) and…

YAY!!! So amazing! I played a little bit of the game, just to get a feel for it. I was so happy!

I did turn the system off and reload a few times just to make sure everything was saving properly, which it was. I am a little uncomfortable with constantly opening and closing my GameCube though, so my husband and I think it’s best if I use his mom’s old GameCube instead. I haven’t tried out どうぶつの森 e+ (Doubutsu no Mori e+) yet, but I will!

Also, I just wanted to mention really quickly that since I have a need to purchase All The Small Things (haha, shitty Blink-182 reference), when I saw that there was a mini version of the Commadore 64… well, obviously I wanted it! I saw it at GameStop for $90 but gave it the middle finger and moved on because no way did I want to spend that much on it! Two weeks later, Amazon had it on sale for $35, so…

Of course I got it! It’s so darn cute just like all the other mini systems I have. I haven’t tried it out yet, and I’m kind of bummed that the little keyboard is just for show, but oh well. I’m still glad I got it!