A few months ago, Ashley McCleo released the first book in her new series, The Fanged Fae series! Titled Blood Moon Magic, this duology centers on a character named Mauri coming to terms with her surprising heritage as Fae royalty- with the added twist that she was bitten by a vampire! I wrote the review for this book on Goodreads back in April. Here’s the blurb:

Mauri always knew she was different.

But exiled fae royalty? She never imagined that.

After a vampire bites Mauri, three hunky fae guardians appear and her secret history surfaces. As does the terrifying truth that Mauri must find the attacker—her vampiric sire—and kill him before the next blood moon.

If she fails she’ll become a lethal nosferatu, a creature totally subservient to her sire and a peon any vampire leader would desire to control.

With the blood moon only days away, Mauri is short on time and battling an increasing craving for blood. And her conflicting feelings toward one of her guardians aren’t helping either.

Can her fae guardians help Mauri find her sire before the next blood moon? Or will she be transformed and unleashed on a supernatural world she’s just beginning to understand and love?

And the cover, which might just be one of the most gorgeous book covers I’ve ever seen: 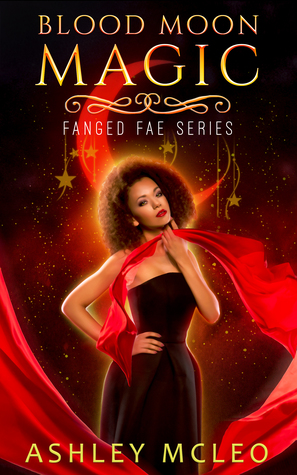 Mauri is gorgeous! And the way the red mixes with gold is just beautiful. Anyway, here’s the review I wrote on Goodreads:

After reading Ashley McCleo’s amazing Starseed Trilogy, I was so excited to start her next series! Blood Moon Magic, the first book in the Fanged Fae series, begins with the main character, Mauri, getting attacked by a vampire in a parking garage as she is leaving work. She awakens later to find three extremely handsome men with otherworldly characteristics telling her she is in danger and they have to protect her!

Naturally, Mauri has no idea what is going on, but she soon learns from the men (who turn out to be her Fae guardians) that she is a Fae princess! Since she was bitten by vampire, she is in danger of turning into a Fanged Fae, or nosferatu. A Fanged Fae is a powerful, lethal creature that is a cross between a faerie and a vampire. The only way Mauri can prevent herself from turning into one is to hunt down and kill her sire, or maker, before midnight of the next full moon… which is easier said than done!

Mauri is not one to give up easily, so she immediately sets out to find her sire, which leads her into dangerous situations. On top of that, she is also trying to hone in on her magical skills as well as her burgeoning vampiric skills in an attempt to defeat him. As days go on, though, she finds herself wondering if she wants to give up her vampire side.

Without giving away any spoilers, a person Mauri never would have suspected set her up so she would become a Fanged Fae. She has to make some difficult decisions and I feel for her!

I really enjoyed this book. Mauri is an excellent character! She is strong and beautiful and kicks ass too! The supporting cast of characters (her Fae guardians, Rowan the witch, and Elizabeth the vampire) are all wonderful as well. I absolutely cannot wait to see where this series goes next!!

I rated this book 5/5 stars on Goodreads!