Faerie Blood is the second (and final) book in the Fanged Fae series by Ashley McCleo. I enjoyed reading the first book a lot, so I was excited for this one. I wrote my review for this book on Goodreads back in May. Here’s the blurb:

War is brewing between the fae and the vampires.

Even worse, Mauri’s evil mother, Queen Nyssa, is to blame.

Mauri, a vampire-fae hybrid, disagrees with her mother’s dreams of dominating Faerie and the human realm through blood and fear.

To stop Queen Nyssa, Mauri journeys to Faerie to enlist an army. She soon learns, however, that the fae do nothing for free. And their price may be steeper than she’s willing to pay.

When other attempts to form supernatural alliances fail too, Mauri must choose the lesser of all evils to align herself with and do it fast.

Because Queen Nyssa has already thrown her plans into action.

And Mauri is the only one powerful enough to stop her.

And here’s the absolutely gorgeous cover of the book: 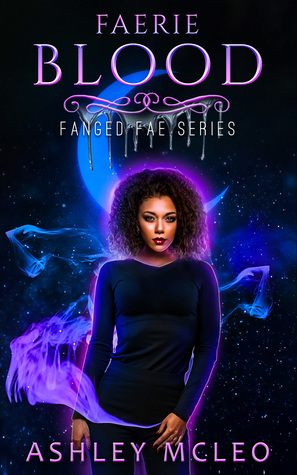 Faerie Blood, the second (and final) book in the Fanged Fae series, begins with Mauri getting her vampire essence glamoured before she enters Faerie. Fae are naturally suspicious of vampires and are especially inclined not to trust nosferatu- so for Mauri, it is better to appear as a full Fae!

Mauri and her friends are headed to Faerie to try to convince her grandparents, the King and Queen of Ys, to amass an army to fight her mother, who wants supernaturals to reign supreme over both the human world and Faerie. After all, Mauri’s mother is the one who orchestrated the attack that turned her nosferatu and wishes for them to rule the world together.

While the Queen is quite pleasant, the King is very wary and has more of a haughty demeanor. He agrees to help Mauri, but tries to trick her into exchanging a blood oath, but Mauri will have none of it! She is determined to amass an army on her own. With the help of her friends (including an awesome rogue vampire) she gets an army together.

Mauri’s mother moves fast though, and the battle is a long and tense one. The outcome was a little different than what I expected, which is not necessarily a bad thing!

I really enjoyed this short series! The characters were all well-developed and I enjoyed the way they interacted with each other. I just felt like maybe Mauri needed a little more time to get her act together. I mean, she was turned nosferatu and then a week later she’s fighting her mother? I wish a few more months could’ve gone by so we could see her grow into her powers more. Nevertheless, this was a fun series and I’m sad to see it end already!

I rated this book 4 out of 5 stars on Goodreads!