Ashley McCleo is such a busy lady! She has been releasing a bunch of awesome books this year, and I’m amazed at what she is getting done! She recently began a new series called The Bonegate Series, which is kind of a companion to The Fanged Fae Series (some characters and stories overlap, which is quite interesting!). In May, I reviewed the book on Goodreads. Here is the blurb:

Lana Shea is a mediocre witch, a lackluster student, and a loner with no clear path in life.

But when a shifter delivers a scroll bearing strange clues to her father’s whereabouts, one thing becomes clear.

She must search for the father she’s never known.

Lana races across Dublin solving the obscure clues until finally, she is transported into a bleak kingdom in Faerie.

A kingdom her father rules.

When asked to participate in the Successional, a violent royal tournament, Lana accepts. As do twelve of her new siblings. To earn her father’s attention, she must win.

Under the tutelage of her handsome guard, Lana learns Faerie is darker than she ever imagined and as a competitor, there is more than just her father’s love at stake. In fact, the fate of fae she’s come to know and cherish may be on her shoulders.

Can she master her magic in time to win? Is Lana willing to spill the blood of her newfound siblings to better her life and help those who need it most?

For fans of Throne of Glass and the Cruel Prince comes Hawk Witch, an epic Faerie tale with a dark twist and slow-burn romance. Warning, Hawk Witch is dangerously addictive and may keep you up late into the night! 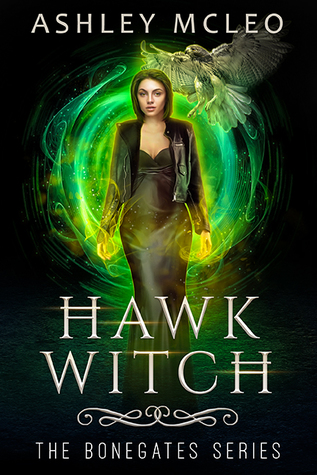 This is my review that I posted on Goodreads:

I received an ARC of this book in exchange for an honest review! 🙂

The first book in The Bonegate Series, Hawk Witch, begins with the main character, Lana, graduating from college. She’s a bit of an outcast, as she doesn’t have many friends besides her lifelong best friend, Finn, and her trusty hawk, Naela. Lana isn’t really sure what she’s going to do with her life yet. She does possess some magical powers, however- she is an Illuminator, a light witch. The only problem is, she isn’t very good at magic, and she doesn’t practice like she should either!

Her life is practically turned upside down when she is visited by a shifter elf who proposes something peculiar- solve a few riddles and potentially meet her long-lost father! Of course, Lana can’t resist this offer, and enlists the help of Finn to solve the riddles. After they solve the last riddle, they both touch a stone at the same time (a “bonegate”) and are transported into the land of Faerie.

Once in Faerie, Lana learns that she has many half-siblings because her father (the King of Lyonesse) is at war with Queen Pari of Buyan… and he needs strong magical creatures at his side. Um, yeah dude… way to be an absentee father for like 20 years and then go “Oh yeah, help me fight someone.” Pssh, I would’ve been out of there so fast!

Anyway, the King allows Lana and her siblings to train for a couple weeks before they compete in what is known as the Successional. As the name suggests, the Successional will determine who will become general of the king’s army and second in line to the throne. Some of Lana’s siblings are more competitive than others, and they all display a wide variety of magical talents. While in Faerie, Finn discovers that he is actually one of Lana’s siblings as well… and he never knew he had magical abilities!

I felt like the king was exploiting his children by parading them around and by even holding a Successional in the first place. Despite this, Lana and all of her siblings want to stay and fight, which I thought was a little strange. I mean, no one wanted to go back to their old lives?? Not even Lana, who had a close relationship with her mother? Doesn’t make sense to me.

Anyway! No spoilers, but the Successional’s winner was pretty much who I assumed it would be all along. Also, Lana discovers that her hawk is more than just a pet- she is a familiar, so she is really in tune to Lana’s thoughts and emotions. All in all, I enjoyed this book and can’t wait to see what happens next!