Rogue Blood is a short story set in the Nocturnal Academy universe. I originally posted this review on Goodreads in December 2019! Here’s the blurb for the book:

As a half fae, Onyx Logan knows not to trust anyone since they might have contacts to the vampires, who’d love nothing more than to enslave a fae like her.

However, when Onyx and her mother are threatened by their landlord, Onyx becomes desperate to keep a roof over her head and accepts a waitressing job.

The bar has a lot of strange customers, and Onyx promises herself to get out as soon as she saves enough money.

Just as she is about to quit, something horrible happens…

Nocturnal Academy is a four-book series (prequel and trilogy)

The prequel, Wicked Nobles has been released as part of the Academy of Magic boxset.

Book 1, Cruel Elites will be released on the 5th of December.

Book 2, Vicious Royals will be released on the 18th of December.

Book 3, Savage Monarchs will be released in winter 2020. 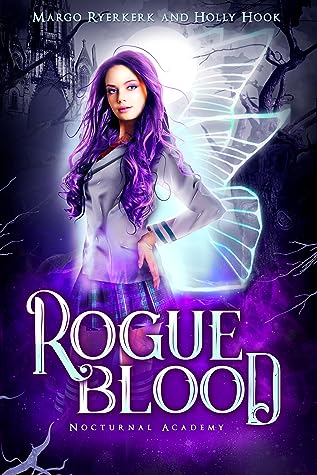 Rogue Blood is a short story that takes place in the Nocturnal Academy universe, just before Onyx begins attending the Academy. The story begins with Onyx at school, where rich, snobby girls are making fun of her. She tries not to react to them, because her mom told her rich people are often involved with vampires. This means that if they find out that Onyx is half fae, she could be in big trouble!

After school, Onyx discovers that she and her mom are about to be evicted from their apartment because her mom couldn’t afford to pay the rent. She is unsure of what to do but wants to help out somehow. It just so happens that she meets a woman at a bookstore, who in turn offers her a job at her bar. I wanted to slap Onyx and say “NO! Don’t do it!” Of course, she ends up taking the job because she doesn’t want to be evicted.

As the saying always goes, if something is too good to be true, it probably is… and Onyx ends up getting herself in a really sticky situation. I feel bad for her, though, knowing that she is doing all of this for her mom… and her mom just ends up selling her to the vamps! Anyway, I enjoyed this fun little story, and it was interesting to get a glimpse into Onyx’s life before Nocturnal Academy!

I gave Rogue Blood 4 out of 5 stars on Goodreads!