Savage Monarchs is the final book in the Nocturnal Academy series by Margo Ryerkerk and Holly Hook (though the story does not end here- the next series they wrote is a direct continuation of what happens after this book!). As always, I received an ARC of this book and am re-posting my review here as a courtesy to the authors! I originally reviewed this book back in February on Goodreads.

Escaping the academy was just the beginning.

I’ve made it out of Nocturnal Academy.

No longer do I exist to please the vamps. Now, as a member of the Winter Court, my job is to execute them. But maybe my new standing is no better than being a courtesan. Now I am to become an assassin for the King of the Winter Court. The rules of the game might’ve changed, but I’m still a pawn.

If the King of the Winter Court thinks that I’m going to turn into a mindless soldier after everything I’ve been through, he’s in for a rude awakening. I’m going to do this on my terms while keeping a wall around my heart at all times.

I will not be vulnerable again.

Life, however, has other ideas. Like throwing in a friend from my past and worse, Thorsten, a handsome jerk of a vampire who has messed with my mind and feelings one too many times.

I might’ve left Nocturnal Academy, but I’m far from safe.

Enter a magical world where a half-fae will fight for her voice to be heard! 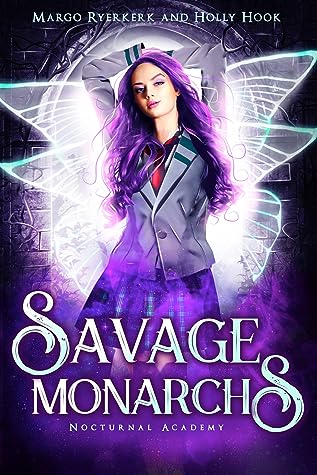 Savage Monarchs wastes no time jumping right back into the action of the previous books! It begins with the vampire Thorsten witnessing everyone freaking out over Onyx escaping the Academy. He doesn’t quite know where she went, but he is happy she escaped- and he hopes to see her again.

Meanwhile, we find out that Onyx has actually been spirited away by her father, who is King of the Winter Court. This confirms what Onyx suspected all along- she inherited ice magic from her father. She is pretty wary of her father, because she thinks he saved her so her could mold her powers to use for his own devices. Despite this, she wants to train and become a warrior princess for the Winter Court. Her goal throughout this novel is to find a way to kill Volthus, the vampire that “bought” her at the end of the last book.

I enjoyed this book, and I thought the ending was kind of sweet. I have to wonder, though, how this girl so quickly became a warrior. One minute, she’s at the Academy barely able to conjure any sort of magic; the next minute, she can fight and outsmart vampires (and fae) that are way older and more experienced? Anyway, this is still a pretty good story! Supposedly the next few books in the series will focus on other characters (neither of whom I’m very fond of), but hopefully we’ll see more of Onyx someday!