Like I mentioned a few days ago, I finally bought and started playing Stardew Valley last week! I’ve wanted this game for so long because it seemed like a great mix between Harvest Moon, Animal Crossing and maybe even a little bit of Minecraft/ Terraria. Plus, the fact that this game was all created by one person just blows my mind! Anyway, here’s my first impressions of the game!

The game didn’t take that long to download, which I thought was nice. I’ve never used Steam before, so I wasn’t sure what to expect! Immediately after clicking to start a new game, I was presented with a robust character customization screen!

I tinkered around with the options for a bit (so many shirts to choose from!) then thought about what I wanted to name my farm. I decided to give a humorous nod to my grandfather and name it Spartacus Farm. It’s a long story, but sometimes when I was a kid he would come out of his room randomly and yell “I’m Spartacus!” for no reason. It used to crack me up because it was so random and silly!

It took me a minute to decide what kind of farm I wanted, too. I know there was a recent update that allowed you to choose a different type of farm, but in the end I decided to stay true to the original game and just pick the standard farm. I figured I can always create another character later and choose a different farm!

So the game begins with me working some boring ass job and just hating life in general. I opened a letter from my grandpa, who told me to go live on his farm in Stardew Valley. If only it were that easy to just ditch the world and go live on a farm… 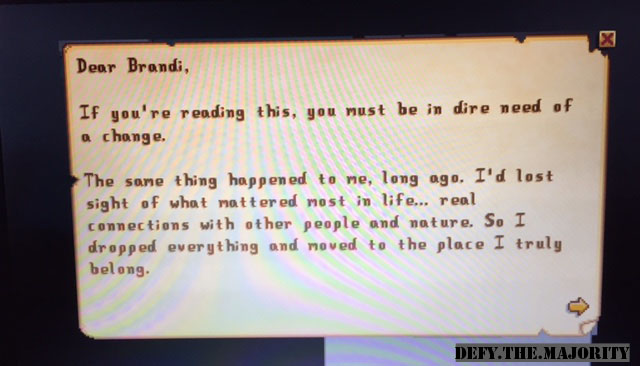 Upon arrival in Stardew Valley, I met Robin, who showed me to my farm. What a mess this place is!

After meeting the mayor, I was pretty much free to do whatever I wanted. I had a new goal to complete, which was to meet everyone in town. I immediately set off and met several people on my first day. Some were nice, like Evelyn… 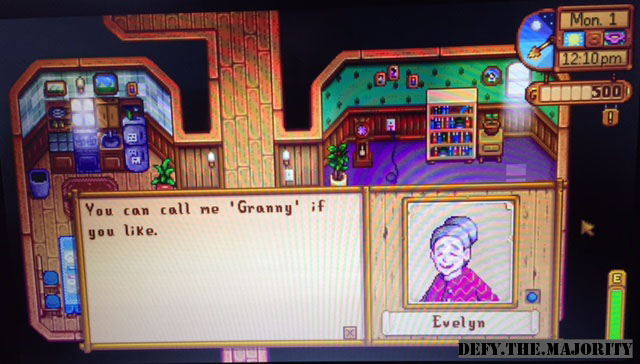 I did a little bit of exploring just to get myself used to my surroundings, too. I found a cute playground but I couldn’t play on it! 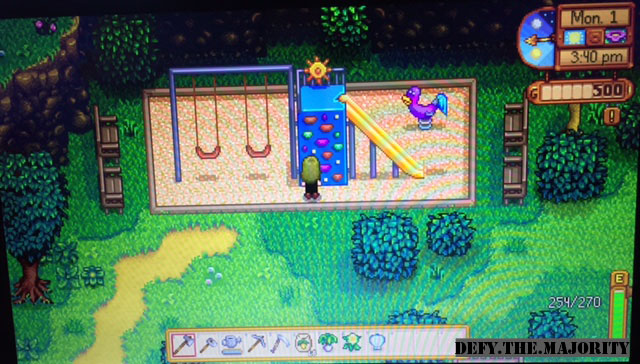 After awhile it started getting dark, so I wanted to head back to my farm. Luckily there is a map to use, because I got so lost!

The next morning when I woke up, I had a letter from some man named Willy who wanted to meet me! It sounded a little odd, but I went to see him anyway. Turns out, he wanted me to have his old fishing pole. Um, okay…

I basically spent the next few in-game days just exploring and trying to get myself used to where I was. Some other interesting places I came across were an arcade…

and some creepy, dark alleyway! The music even turned spooky when I got in this area, so who knows what that’s all about.

Anyway, after like 5 in game days, I still hadn’t met everyone! That annoyed me, so I looked to see who I hadn’t met, then used a Wiki Guide to find out exactly where they all hung out. Hey, I have no problem using a guide if I need one! I didn’t want to waste too much more time trying to find these jerks. So I finally met Elliott on the beach, Linus near his tent, and Maru at her house. 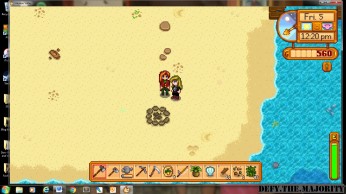 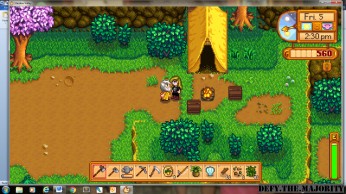 I had previously seen Maru in her house, but she was in her bedroom and I couldn’t go in because we weren’t “good friends.” Fine!

I also tried to talk to Haley one day, but it said she was ignoring me! That pissed me off, so I started following her around. After a minute, she started running from me! Haha! I chased after her for a bit, then left her alone. What a snooty bitch! 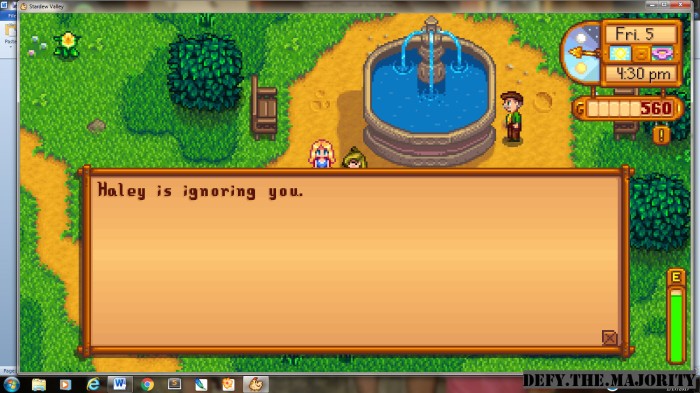 All in all, I’m really enjoying this game. The controls were a little weird to get used to at first, but I’m not a huge PC gamer, so I’m not used to playing with a mouse and keyboard! Overall, though, this seems like a really fun, addicting game. I can’t wait to see what happens in the coming months and years in Stardew Valley! I’m very glad I finally bought it 🙂